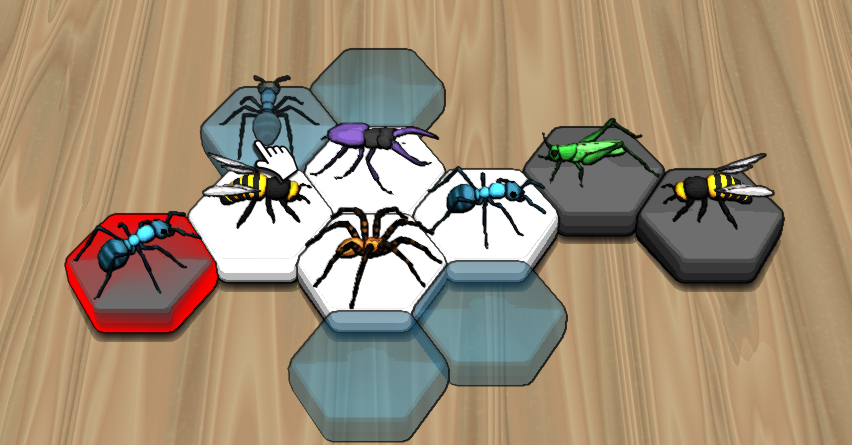 This is the English version of an article I wrote as an user of German gaming site Gamersglobal. The original user-review can be found here (in German).

Ants, spiders, beetles, grasshoppers and a queen bee – this is not a list of things to find in your garden at the end of summer. It rather lists the protagonists to play in the digital version of the board game Hive. Read on to find an answer how the video game released for Xbox 360 and PC compares to the original board game. END_OF_DOCUMENT_TOKEN_TO_BE_REPLACED

Quite late, but just within the 96 hrs grace period, I finished my March entry for OneGameAMonth. This game is a very simple roguelike without real graphics. 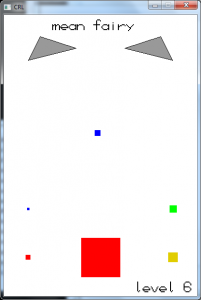 The gameplay is pretty straight forward. Just click on an arrow on the top of the screen to progress, click the monster to fight, or click the brown treasure to open. You can only advance if a room is cleared and there are empty rooms on your way.

There are four colors to find which also serve as your stats. Yellow improves maximum health, blue regeneration, red is for damage and green prevents some damage.

So there was an interesting topic for last month Experimental Gameplay Project, which was “time manipulation”. I have joined EGP once with the infinite floating islands prototype and it was a lot of fun and also quite successful regarding download numbers of the prototype.

Hence, I planned to join this contest again anyway and the theme was great. An interesting idea formed in my head which I’d like to sketch in this post. Unfortunately, due to time constraints and me being not so certain about the precise gameplay of the idea, I never made the game. Nevertheless the concept feeled pretty great so I want to share my thoughts on it so far. Maybe I will make a game out of it one day.

Basically, for making a game with the theme time manipulation you have to overcome the linear concept of time. Good examples for games that use this as a mechanic are Braid, for sure, and Sophie Houlden’s Rose and Time.

For this contest I wanted to make some sort of strategy game. Not as ambitious as Achron but with some small similarities in the mechanics. My target platform for this game was flash and/or mobile which makes for a rather small and streamlined game. This also suits the time limit of one week development time.

The basic idea for my game was to besiege a planet with four space stations during an overall time cycle that covers the whole development of a civilization. The player can manipulate the time by switching the planet to a specific era which will consume time manipulation energy. This energy is identical to the time left to play this level. So with every time switch you will reduce your time left to beat the game. The space stations are constantly firing shots at the planet. The player can switch the frequency of this shots which will also consume energy.

The development of the planet depends on the impact of the shots. It makes a difference at which era how many shots have reached the four different sectors of the planet. The basic mechanic for that is:

To make this concept work, the whole timeline of events will be calculated with every impact depending on what has happened so far in the different ages. The player interactions at any time of the level are:

To finish the game, the resulting state of civilization is calculated when the time has run out. Additionally I planned a visualisation of all the eras after each other at the end of the game. A winning strategy would prevent sectors to grow too strong too early but also prevent being to late with the bombards.

While writing this post I noticed that this seems to be a concept more complicated and not as matured as I thought last month. I don’t know if the mechanics would work as intended and make any fun. But events like the Experimental Gameplay Project are totally the place to make a prototype to try it out. Right now the theme is “vegetation” so if you want to try out some crazy experimental gameplay ideas, why not over there.

@dogbomb started this on twitter (#ruleofindiegames) and these rules are just true (with a wink) and important to save somewhere. So I decided to make this compilation. Will be updated in the future.

(Additional important rule: 0.  not to listen to gits trying to tell you what the rules are – @DarkAcreJack)

More most probably to come…