This Ludum Dare I only could spend one day for making a game and I wanted to try out a new technology (HaxePunk). Usually that’s not a good idea for a time restricted jam, especially with restricting oneself even further.

Working with a new language and library worked surprisingly well. Tuning down the scope of my game probably helped, but Haxe seems to be quite a convenient language to work with. The HaxePunk library was a great addition to have quick results, as most of the basic engine stuff necessary for my game was already in there. 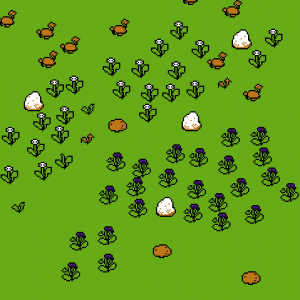 For creating some ambient background sound for my game I had a nice idea: As it is finally spring now in Germany, I wanted to record some spring sounds, like birds. I did this with my phone, which worked pretty well. Unfortunately transferring the file into Audacity did something very strange to the sound and it was too late to figure out how to solve it. That is the reasons the bird sounds seem more like from a jungle than a mid-European garden.

What’s that game about

As mentioned, I didn’t have the full 48 hours, so I had to come up with something really simple. The basic idea has some resemblance to my LD23 game Bottlecolonies, but this time with free placement and only two different colors. This makes the gameplay probably a little boring quite soon.

The idea is, that with each new planted flower, the existing ones will grow through different stages. If there are negative influences around (potatoes, mushrooms, different kind of plant) and surpass the positive ones (same kind of plants) the plant will decay. Additionally, a feature implemented quite late, the mushrooms will spread for a while. So goal and strategy of the game is to place the same kind of plants close to each other, block spreading of mushrooms and avoid the negative stuff around your seedlings. The rhythm as how the two different plants are seeded is quite simple. Each three plants it will change. You will win the game if there are enough grown plants and will lose if there are too many decayed ones.

So all in one, I’m quite happy with my entry.

Important hint: There is sound in this game. In case you have an open window close to you, you will maybe miss it because you think that are the birds outside… and in the game!

Made within 48 hours for Ludum Dare 26. You can vote here, if you’ve also participated.

I’m really happy with my entry for the actual Ludum Dare event. The game itself feels very consistent and the feedback is very good so far. Hence I’m actually working on a post-compo version of the game. It is in open beta at the moment and shall become a free puzzle strategy game for Windows, Linux and maybe Mac PCs.

I will post development updates on this blog with some spare additional posts on the Ludum Dare site.

Here is a link to the game’s page.

And to give you an impression of the newest map in the game: 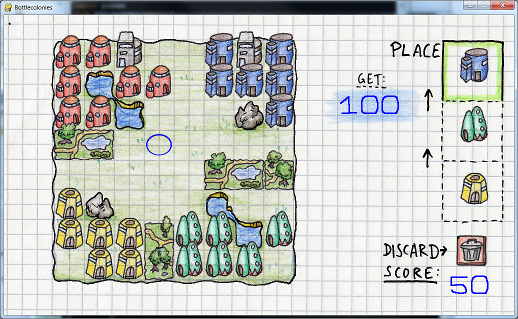 — This is a cross-post from the Ludum Dare Compo page —

So finally I’ve found some time to write up my impressions of the past Ludum Dare event. As ever it was a big pleasure to participate and I’m really impressed with the sheer amount of games being made and the overall quality which feels a little higher than the last times.

Now about my game “Bottlecolonies” which you can play here.

To sum it up

You can see I’m really glad with my LD entry this time. I’m very confident now with my tools (especially python/pygame) and know roughly how much time different steps in development needs and what I’m able to achieve in 48 hours. I think that is the most valuable experience you get from an event like this.

Additionally the reception of my game has been quite positive. Hence I’ll put some more effort in a post compo version which shall at least include:

As I’ve already written two teasers for this post mortem I’ll stop here and just give you a visual impression of the development details:

Want to try and rate ?