I totally lack the motivation to code any more today in the evening after coding at work for a research project today.

So I took a pen to make some sketches for the buildings to construct in the game.

Regarding the game mechanics, I made some notes. There will be the sketched five types of buildings:

The goal is to balance your ressources by constructing those buildings. The trees will also have an influence on the ressources.

Finally I’ve written the first lines of code today. These are to create the basic graphics on the screen. Unfortunately I haven’t started to implement the real growth of trees, so this is just a sprite test. Nevertheless it works fine. So I’m quite happy with the outcome of today’s work. I also specified the game mechanics on paper. The game will be about balancing the 4 different ressources (soil, water, air and energy) by constructing five different buildings and let the trees grow. At the start of the game a goal is selected randomly by a fixed set of goals. These goals will include making a specific amount of trees or a specific height. Fine tuning of the concept is still necessary. 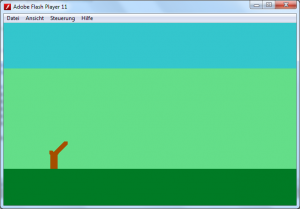 Today I have made just little progress on my game for Experimental Gameplay Project and OneGameAMonth. At least I’ve decided for a name: “Growstruct”. Also I’ve detailed the game mechanics and made some first sketches for the buildings to construct. They will definitely not look like the buildings in the mockup from yesterday’s post. They’ll be smaller and more greyish. Finally, I made a new project in FlashDevelop. So I’m not that far away from writing the first lines of code ;).

Started with gamedev today, but haven’t written a single line of code yet. I just made some basic sprites and a mockup of the main screen of the game. The trees will grow by themselves and you can construct tree-buildings that will have an impact on the three resources. These resources will influence the growth of the trees.

Sounds confusing? Yeah, I’m still not sure about the main game mechanics. But the game will look similar to that mockup. 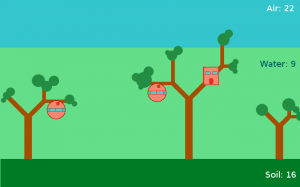 The plan is to make a Flash game with HaxePunk.

So there was an interesting topic for last month Experimental Gameplay Project, which was “time manipulation”. I have joined EGP once with the infinite floating islands prototype and it was a lot of fun and also quite successful regarding download numbers of the prototype.

Hence, I planned to join this contest again anyway and the theme was great. An interesting idea formed in my head which I’d like to sketch in this post. Unfortunately, due to time constraints and me being not so certain about the precise gameplay of the idea, I never made the game. Nevertheless the concept feeled pretty great so I want to share my thoughts on it so far. Maybe I will make a game out of it one day.

Basically, for making a game with the theme time manipulation you have to overcome the linear concept of time. Good examples for games that use this as a mechanic are Braid, for sure, and Sophie Houlden’s Rose and Time.

For this contest I wanted to make some sort of strategy game. Not as ambitious as Achron but with some small similarities in the mechanics. My target platform for this game was flash and/or mobile which makes for a rather small and streamlined game. This also suits the time limit of one week development time.

The basic idea for my game was to besiege a planet with four space stations during an overall time cycle that covers the whole development of a civilization. The player can manipulate the time by switching the planet to a specific era which will consume time manipulation energy. This energy is identical to the time left to play this level. So with every time switch you will reduce your time left to beat the game. The space stations are constantly firing shots at the planet. The player can switch the frequency of this shots which will also consume energy.

The development of the planet depends on the impact of the shots. It makes a difference at which era how many shots have reached the four different sectors of the planet. The basic mechanic for that is:

To make this concept work, the whole timeline of events will be calculated with every impact depending on what has happened so far in the different ages. The player interactions at any time of the level are:

To finish the game, the resulting state of civilization is calculated when the time has run out. Additionally I planned a visualisation of all the eras after each other at the end of the game. A winning strategy would prevent sectors to grow too strong too early but also prevent being to late with the bombards.

While writing this post I noticed that this seems to be a concept more complicated and not as matured as I thought last month. I don’t know if the mechanics would work as intended and make any fun. But events like the Experimental Gameplay Project are totally the place to make a prototype to try it out. Right now the theme is “vegetation” so if you want to try out some crazy experimental gameplay ideas, why not over there.

It looks like this month I can spend some more time on coding and stuff for my games. Additionally, as my Raspberry Pi arrived last week, I have some extra motivation to make my pygame based games run on it.

The latter is not as easy as I thought initially. With its rather limited hardware the Pi provides quite a challenge for my game Bottlecolonies to run in an acceptable speed. So I started profiling and optimizing my code which is quite an interesting experience so far.

For example, I was able to make blitting my number font three times faster by removing an unnecessary surface copy in every call. With that success I will continue to search for bottlenecks in my code to remove them. On a standard PC I wouldn’t even have noticed.

There is a second project I haven’t forgotten yet, which makes most of the traffic on this blog. That is my Experimental Gameplay Project prototype “Infinite Floating Islands“. The prototype has been made in less than a week and was quite buggy but has over 100 downloads so far and I really like tha basic idea of it. (Just for comparison, Bottlecolonies’ postcompo versions, which are much more “finished”, have a cumulate download count of about 15)

I tried to remove the bugs of the prototype by heavy refactoring but haven’t gotten that far actually. So it looks like I have to start this again from scratch to make it stable and expand on the idea.

So that’s it for now. Expect some more regular updates on this blog about those projects.