To be honest, I didn’t put that much of my spare time into game development in November due to mainly two reasons:

Yeah, that’s unfortunately right. I got into playing this MOBA – never tried a game of this genre before – and basically wasted a lot of my spare time in November to it (It’s pretty good from a gamedesign/balancing perspective but also with a pretty steep learning curve). Anyway, that game inspired me to try something out which is more gamedev related.

For some time now I wanted to give modelling in Blender a try. And since there is the possibility to create some nice visual equipment stuff for DOTA 2 I even had an interesting test case. So I decided to make something for the hero Lich. In the picture you can see the progress I’ve made so far. 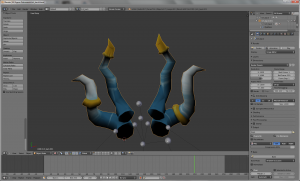 Technically interesting from the gamedev perspective is how Valve’s Source engine interprets different shader masks. That is what is still missing in my specific case – to author the color channels of the two shader masks to let the engine now where reflective, etc. material is.

Blender itself was not that difficult to get into. Not as difficult as I’ve read and heard beforehand from different sources. So I can put this experience under some gamedev progress at least :).

For painting the textures I also invested some (little) money into this tool:

Quite a great tool for precise control in painting stuff digitally. This also comes in quite handy for future gamedev projects fitting the hand-painted style of my prevoius games. Finally what am I up to next?

Expect some more updates in December.

In this post I want to give some background information about the Experimental Gameplay Project February entry “Infinite Floating Islands“. These will cover some of the unrealized ideas and features of the game and some technical background. Additionally I will sketch some possible future plans what to do with my proof of concept.

I had a very clear idea how to implement storage of the world data to make a persistent game world. This was supposed to be procedural seed-based with an additional data structure for the actual state of the world. The sketch for the save looked like that:

The coordinates should be saved for faster access in minimap creation. Every other attribute of the islands could be re-generated based on the seed with the island’s seed saved for faster processing. Unfortunately I didn’t manage to implement any saving of the world data within the week of the challenge.

Aside from saving the world there were some other things I initially planned to implement during the development week. The most important one would have been some sort of local biomes so that the player would reach different areas while travelling. These areas would have a different randomized setting for the procedural world and island generation with alternating sets of sprites and background colours. I think this would have made the exploration way more interesting.

Additional missing features are more of a visual nature. One should have been an open cable car to travel, similar to the one on the mockup above.

Thinking about expanding the game idea I have some more features in mind to make this into a real game.

Reception of the prototype

At the time writing this there have been 55 downloads of the game archive. I didn’t get any direct feedback by now but this number is quite impressive for my personal context. For me personally this one week challenge was a great experience about how far I can come within these constraints. So I’m quite motivated to expand this game idea which brings me to the final part of this post.

Admittedly the actual release of the game prototype is quite buggy. I plan to remove the bugs which mainly were caused by dirty coding under time pressure. Additionally I’d like to add distinct areas the player can reach while travelling. This improved version I would like to post to a broader audience for some feedback (TIGsource forums for example).

Let’s see what will evolve from the Infinite Floating Islands.